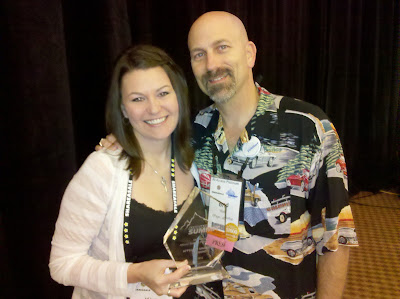 I’m still in awe over receiving the 2012 Wayne Porter Affiliate Marketing Legend Pinnacle Award at Affiliate Summit. After being nominated for “Affiliate of the Year” three years in a row (2009, 2010, 2011) and never winning (but still an honor nonetheless), I was in utter shock to be nominated for the “Legend” award. I was up against some stiff competition, Brad Waller of EPage.com and Adam Weiss, a “big wig” at Linkshare.

Brad was one of my first affiliate friends, so I indubitably voted for him to win. Many think “Legend” makes one sounds “old”, but I like to think of us as “experienced.” I then found out that Brad is the one that in fact nominated me for the award! He wrote this very kind recommendation for me:

Kim was one of the first in so many different areas.  She was a “mommy blogger” before there were bloggers, she did coupons before they were the “next big thing,” and so much more.  Kim has been a fixture in the business and our events, openly talking about what she does, teaching others how to follow her footsteps, and continuing to create more sites.  And all of this from Nebraska!

Thank you so much, Brad! I wish we could have both won!

Someone suggested that I was not only the youngest to win this award, but also the first woman to the win.  I did some research for validity and discovered the intelligent Kellie Stevens was actually the first woman to win (2009). As for the youngest, I believe I am a year older than Brian Littleton (2008).  I am good company with them as well as Tim Storm (2006), Todd Crawford (2007), Scott Jangro (2010) and Todd Farmer (2011).

When Affiliate Summit Co-Founders Shawn Collins and Missy Ward announced my name as the winner, I honestly was in shock. The reality didn’t sink in until afterwards when I was sitting next to Lisa Picarille, looking at my trophy, and listening to Eric Thomas speak. And that’s when I started to cry.

Success is based on individuality. It starts with a vision.

Failure is not an option.

You are going to get to where you want to get to.

And with every new quote Eric Thomas spoke, I sobbed a bit harder realizing, despite my failures along the way, I finally got to where I wanted to be. I guess that means it is now time to start dreaming bigger!

Learn How To Make (More) Money From Home

Lynn Terry: A Work-at-Home Mom I HAVE To Meet!

Kim and friends have been sharing tips about working from home for over 20 years. Pajamas are optional.

How To Make (More) Money From Home